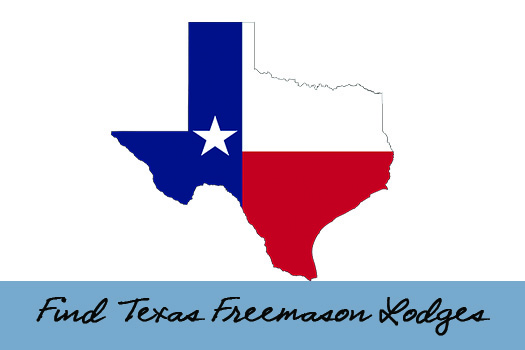 How can I find Texas Freemason lodges? – Find a Masonic Lodge Near You

Texas Freemason Lodges… How can I find Texas Freemason lodges?  – Find a Lodge Near You today! Did you know that you and your family are welcomed to visit any Lodge within the State of Texas? It’s true – many Lodges host Family Nights, Open Lodge Meetings, Presentation and Award Events, and Social Gatherings in what Masons in Texas call their ‘Grand Lodge‘. Simply use the link below to contact a Lodge nearest you. Sometimes, towns are so close that one lodge actually covers both. While for rural communities – there maybe a county wide lodge in some cases.

Here’s how to find Texas Freemason Lodges Near You!

The Worshipful Master and Officers of the Lodge will be happy to give you a tour of their Lodge. While touring the lodge building ask questions and learn more about how Freemasons helped improve your local community. The Lodge Officers are capable of explaining What is Freemasonry and how becoming a member can be a benefit to you and your family.  Many times, the Lodge Officers will go into detail about the history of Freemasonry and their particular Lodge.  Lastly, remember to invite your family members to ask questions and get the answers they are looking for.  Texas Freemasons pride themselves on being open and honest to directly address any of your questions or concerns. Here is the link to the lodge locator for the Grand Lodge Of Texas.

Texas Freemason Lodges – Learn about the history of Freemasonry in Texas

In the 1800’s Texas, one thing many of the settlers had in common when arriving to Texas was Freemasonry. Various good men of different backgrounds, professions, and cultures could often found offering a hearty welcome in the “friendly grip” of the brother Master Mason’s handshake. The first Mason known to have entered Texas was Major Zebulon M. Pike. He was a member of Lodge No. 3, Philadelphia. Brother Pike came in to Texas around 1806 and 1807, scouting the headwaters of the Arkansas and Red rivers, and the Spanish settlements of the Rio Grande.

As the winds of Texas’ war of independence began to blow in the fall of 1835, there were many Masons in the foremost positions of authority, both military and political. The Texans’ first shot was fired by Eli Mitchell on October 2, 1835, near Gonzales. He and his commander, Colonel John H. Moore, were both Masons.

In March 1835 the first Masonic meeting was held in Texas for the purpose of establishing a lodge in Texas. Six Masons met under an oak tree near the town of Brazoria. They applied to the Grand Lodge of Louisiana for a dispensation to form and open a Lodge. A dispensation was issued and later a charter. This first Texas lodge was called Holland Lodge No. 36. It was named after then Grand Master of Masons in Louisiana, John Henry Holland. Anson Jones was the first Worshipful Master of Holland Lodge No. 36, now Holland Lodge No. 1. The charter was brought by John M. Allen and given to Anson Jones just prior to the battle of San Jacinto.

Masonic historian Dr. James D. Carter counts twenty-two known Masons among the fifty-nine signers of the Texas Declaration of Independence, signed at Washington-on-the Brazos on March 2, 1836.  On March 6, 1836, after thirteen days of siege, the fortified Mission San Antonio de Valero, known as the Alamo, fell to the final onslaught of Mexican troops under the dictator General Antonio Lopez de Santa Anna. Among the 188 Texans who died that day, only a handful can be reliably identified as members of the fraternity.

Two more Texas lodges were formed, also given dispensation and charter by the Grand Lodge of Louisiana. They were: Milam Lodge No. 40 in Nacogdoches, and McFarland Lodge No. 41 in San Augustine. Both were formed in 1837. These two lodges, together with Holland Lodge No. 36, sent representatives to meet in Houston and established the Grand Lodge of the Republic of Texas. The convention elected Anson Jones the first Grand Master of Masons in Texas. It should be noted that Anson Jones was the fourth and final President of the Republic of Texas, prior to becoming a state. 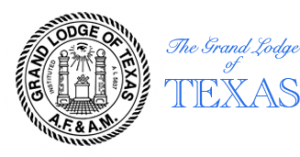 THE GRAND LODGE OF THE REPUBLIC OF TEXAS

By the end of 1837, three lodges had been chartered in Texas by the Grand Lodge of Louisiana: Holland Lodge No. 36, Milam Lodge No. 40 at Nacogdoches, and McFarland Lodge No. 41 at San Augustine. On December 20, 1837, President Sam Houston presided over a convention of representatives of these three lodges in the city of Houston, and elected Anson Jones the first Grand Master of Masons in Texas. The first meeting of the Grand Lodge of the Republic of Texas was held in Houston on April 16, 1838.

By the year 1846, did you know that Freemasons had served in nearly every major governmental post in the Republic? It’s true!

All the Presidents and Vice Presidents of the Republic of Texas were Masons. In 1844, George K. Teulon, Grand Secretary of the Grand Lodge of the Republic of Texas, addressing a gathering of Masons in Portland, Maine, observed “Texas is emphatically a Masonic Country: Our national emblem, the ‘Lone Star’, was chosen from among the emblems selected by Freemasonry, to illustrate the moral virtues — it is a five-pointed star, and alludes to the five points of fellowship.”

The First Particular Lodges in the Republic of Texas

Here is a list of the very first blue lodges in the Republic of Texas: Holland No. 1 Houston; Milam No. 2 Nacogdoches; McFarland No. 3 San Augustine; Temple No. 4 Houston; St. John’s No. 5 Brazoria; Harmony No. 6 Galveston; Matagorda No. 7 Matagorda; Phoenix No. 8 Washington; DeKalb No. 9 DeKalb; Perfect Union No. 10 (this lodge was never officially chartered) San Antonio; Milam No. 11 Independence; Austin No. 12 Austin; Constantine No. 13 Bonham; Trinity No. 14 Livingston; Santa Fe No. 15 (this is another lodge that was never officially chartered) Santa Fe (N.M.); Friendship No. 16 Clarksville; Orphan’s Friend No. 17 Anderson; Washington No. 18 Washington; Forrest No. 19 Huntsville; Graham No. 20 Brenham; Trinity No. 21. Crockett; Marshall No. 22 Marshall; Clinton No. 23 Henderson; Red Land No. 24 San Augustine; and Montgomery No. 25 Montgomery. Please note, that some of the information can be sourced from the book, The Texas Masons, by Pete Normand. Copyright 1986, Brazos Valley Masonic Library.

Texas Freemasonry feels like is a fraternity. The Texas Freemason Lodges’s membership is restricted to men. Yet there is no hazing as is found in some college fraternities. The Masonic Order is a serious group, most especially in the State of Texas.

It exists to take good men and help them to become better men. Thus, it is not a reform society. It does not exist to reform criminals, nor would such persons benefit from its teachings.

Masonry has a proud heritage of over 170 years of service to the State of Texas. They hope to continue serving the state for another 170 years and beyond. This blog article was designed to help you to better become understanding of the purpose of our fraternal organization.

Texas Freemasons now look to the future with the hope that a better understanding will allow particular blue lodges to seen as the rightful place to find men of integrity and honesty in every Texas community. This needs to be right alongside of the church, the home, the schools, and the civic organizations as a positive force for good. With this better understanding,

Freemasons in Texas have every reason to believe that they can all work together to make their government, their schools and their churches even stronger than before. The strength of Texas has always been built upon the combined efforts of all these groups, and the Grand Lodge of Texas has contributed valuable service to Texas churches, our nation, the state of Texas and of course the local communities in Texas. So if you are ready to find a lodge near you – now is your chance…check out this link to the Texas Lodge Locator Program

Who are the top leaders in the Masonic Grand Lodge of Texas?

The Most Worshipful Grand Master is the top leader for Freemasonry in the State of Texas.