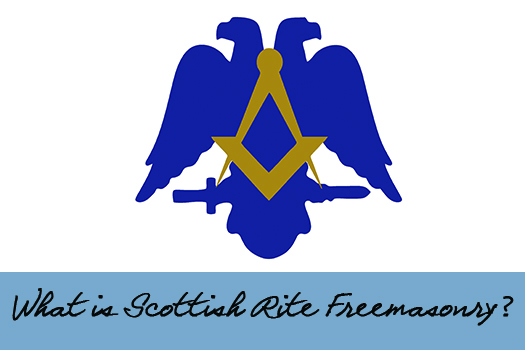 What is Scottish Rite Freemasonry?

Why do they use the word Scottish?

The use of the word “Scottish” has led many Masons to believe that the Rite originated in Scotland. There was also a false belief which persisted for many years, that a man had to go to Scotland to receive the 33°. Neither of these statements is true. Actually, the first reference to the Rite appears in old French records where the word “Ecossais,” meaning Scottish, is found. During the latter part of the 17th century, when the British Isles were torn by strife, many Scots fled to France and resumed their Masonic interests in that country. It is believed that this influence contributed to the use of the word “Scottish.”  In 1732, the first “Ecossais,” or Scottish Lodge was organized in Bordeaux, one of the oldest and most influential Masonic centers in France. The membership included Scottish and English members.

What is Scottish Rite Logo a Double Headed Eagle?

Did you know, that the double-headed eagle was probably first accepted as a symbol of Freemasonry in 1758. In that year the body calling itself the Council of Emperors of the East and West, was established in Paris. The double-headed eagle was in all probability adopted by this body, which claimed a double jurisdiction. The eagle, one head inclined to the East and the other to the West, to guard any and all who might approach from either direction.

The accepted symbol of our Rite is the Double-Headed Eagle of Lagash. It is the oldest crest in the world, according to fraternal scholars and was a symbol of power more than two thousand years before the building of King Solomon’s Temple. This impressive double-headed eagle features the white-ribboned motto, pendant from the hilt to the point of the sword, containing the words SPES MEA IN DEO EST, which translates My Hope Is In God.

At this early period, the French Masonic strongholds were in Bordeaux and Paris. On August 27, 1761, the French Grand Lodge at Paris (the Grand and Sovereign Lodge of St. John of Jerusalem), acting with a body of the superior degrees (the Council of the Emperors of the East and West, Sovereign Écossais Mother Lodge), issued a patent to Morin as a Grand Inspector, “authorizing and empowering him to establish perfect and sublime Masonry in all parts of the world.”  In 1761, certain Masonic authorities in France granted a patent to Stephen Morin of Bordeaux to carry the advanced degrees across the sea to America.

In 1763, Morin established these degrees in the French possessions in the West Indies. At that time, Morin promulgated a Masonic rite of 25 degrees which he called the “Order of the Royal Secret” or “Order of Prince of the Royal Secret” (sometimes Freemasons call it the “Rite of Perfection”).   What he established consisted of a system of 25 so-called higher degrees which flourished in France, and which were known as the “Rite of Perfection.”

Was there always 33 degrees in Freemasonry?

It was not until a few years after 1763, other degrees were added, until the Rite had a ritual structure of 33 degrees. The first three degrees being exemplified in a Symbolic Lodge, if a Grand Lodge with subordinate Lodges existed in the area.  Although it was once commonly believed that the Council of the Emperors of the East and West created the Order of the Royal Secret, recent research suggests that Morin was personally responsible for its organization. There also is compelling evidence that, to bolster his authority, he created and backdated documents known as the Constitutions and Regulations of 1762—an act that was not discovered for more than 220 years. About 1763, Morin introduced the Order of the Royal Secret to Kingston, Jamaica, and by 1764, high degrees were brought to North American soil, when they were established in New Orleans, Louisiana.

About this time, Morin empowered an enthusiastic Dutch Mason, Henry Andrew Francken, to establish Masonic Bodies throughout the New World, including the United States. In 1767, Henry Francken, who had been deputized by the Grand Inspector Morin. Soon after, Francken sailed to New York and organized a Lodge of Perfection in Albany, New York.  This was the forerunner of what was to become the Ancient Accepted Scottish Rite in the United States., and in 1767, he began to confer the high degrees in Albany. Fortunately, he also transcribed several manuscript copies of the rituals of the Order of the Royal Secret, some of which survive today. These copies are known as the Francken Manuscripts.

How did the Scottish Rite Grow?

During the Colonial Period, other deputies, appointed by Morin, organized Masonic groups which conferred the advanced degrees at other important points along

the Atlantic seaboard, including Charleston, South Carolina.  On December 6, 1768, Francken appointed Moses Michael Hays (or Hayes), of Dutch parentage, a Deputy Inspector General of the Scottish Rite, for the West Indies and North America. The Hays patent granted authority to confer all the Degrees of Morin’s Order of the Royal Secret. The following year, Francken returned to Jamaica, and by 1780, Hays immigrated to Newport, Rhode Island. In 1781, Hays traveled to Philadelphia, where he met with eight Brethren whom he appointed Deputy Inspectors General over given American States, with the exception of Samuel Myers, who presided over the Leeward Islands in the West Indies in the Caribbean.

Barend Moses Spitzer, one of the Deputy Inspectors General, lived in Charleston, S.C., from 1770 to 1781 and moved to Philadelphia where he was appointed Deputy for Georgia and, after traveling briefly abroad, returned to Charleston by 1788. On April 2, 1795, Spitzer appointed the Irish-born John Mitchell, then living in Charleston, a Deputy Inspector General of the Order of the Royal Secret.  These groups were independent and without supervision or control; however, they all agreed that their authority came from Stephen Morin in Jamaica in the West Indies.

Why is the Supreme Council Important in Scottish Rite Freemasonry?

On August 4, 1813, Emanuel De La Motta,33°, of Savannah, Georgia, a distinguished Jewish merchant and philanthropist, and Grand Treasurer General of the Supreme Council at Charleston, organized in New York City the Supreme Council of the Thirty-third degree for the Northern District and Jurisdiction of the United States of America.

The first Sovereign Grand Commander was Daniel D. Tompkins, 33°. He filled this office from 1813-25. He was at the same time Vice President of the United States for two terms, under president Monroe. Both the Northern and Southern Jurisdictions were created to make progress in unifying the scattered degree-conferring groups, and in standardizing the rituals.

At the present time, the Supreme Council for the Northern Masonic Jurisdiction officially recognizes and enjoys friendly relations with the Supreme Councils of the Scottish Rite in 39 other jurisdictions, and the higher degrees systems (Swedish Rite) administered by the Grand Lodges in the four Scandinavian countries, Denmark, Iceland, Norway and Sweden). There are Scottish Rite centers, called “Valleys,” in 110 cities and towns in the fifteen states of the Northern Masonic Jurisdiction.

The other Supreme Council in the United States is that of the Southern Jurisdiction. It has its headquarters at Washington, D.C., and covers the remaining 35 states, the district of Columbia, and the United States territories and possessions. Yet, it is now officially recognized as being established in 1801 in Charleston, South Carolina. Today, the Scottish Rite has spread throughout the world.

How important is a 33rd Freemason?

One important point which must be recognized by all Masons is the fact that the Scottish Rite shares the belief of all Masonic organizations that there is no higher degree than that of Master Mason. The Supreme Council and its subordinate bodies acknowledge the Masonic supremacy of the Symbolic Grand Lodges, and the Grand Master of Masons is recognized as the ranking Masonic officer present when in attendance at any Scottish Rite meeting.

The high degrees often were referred to as the Ineffable and Sublime (or Superior) Degrees. In the earliest days of the Scottish Rite, the high degrees were conferred only on Past Masters, or virtual Past Masters, of Blue Lodges.  The Scottish Rite degrees are in addition to and are in no way “higher” than the Blue Lodge degrees. Scottish Rite work amplifies and elaborates on the lessons of the Craft.  In the Scottish Rite, all brothers seek to develop society and themselves. They teach new brothers the importance of becoming more patient, generous, tolerant, compassionate, and thoughtful.

So what makes the Scottish Rite so special?

What makes Scottish Rite Freemasonry special today is that they help society develop by supporting education, funding museums, benefiting the arts, assisting with medical research, and aiding the needy. Scottish Rite Masons are giving both time and money to many projects, which helps the community were they live and the society, which is made up of the communities citizens, to grow and develop. It is fundamental teaching of the Scottish Rite that we build our community and our nation, while focusing on benefiting all its citizens.

They sponsor 165 Scottish Rite Childhood Language Disorders Clinics, Centers, and Programs nationwide. Our efforts have been recognized by national awards for our work in speech and language development in children. The Scottish Rite Brothers selected childhood language and learning disorders because they affect more children than all other childhood conditions combined. To hear, to speak, to understand these are the essentials in the development of every young mind.

The Scottish Rite Mason studies mankind’s greatest questions and problems. They have fun doing things together as men in fraternity sharing dramatic, philanthropic, and social events. The Scottish Rite Freemasons strives to ask himself daily to consider just how those principles relate to his everyday lives. Once again, the Scottish Rite is often called the ‘University of Freemasonry” because it’s important lessons and teaching to help a man become the best he can be.

If you like this blog article and want to read more interesting post about Freemasons – go to the home page of the Freemasonry Report Now!